We have been enjoying our last days in Marmaris until we return in late August. We are now just waiting for our solar panels to be installed along with a few new lines. There is always a to do list on a boat...... When ever we start a project it seems that something comes up. For example today Shaun was following the VHF electrical cable up the mast when to his SURPRISE there was a birds nest inside. By the time we pulled out the nest completely it was half of a black garbage bag full...... how crazy is that? I forgot to take a picture oops.

Over the last few days we have played foosball, bought a large quantity of plastic containers (and yes I washed all of them), attended a not so fun kids fair, found an odd looking plant, had Paige work on her Science this term electricity by changing out her own light fixture in her stateroom, got the girls hair cut (WOOHOO), relaxed at "coffee", released a pigeon, provisioned the boat when we rented the car (this felt like luxury) and finally we took sv Element out on her inaugural sail to see how she sails.  Pictures are below.

There were a few hiccups (it took us 1.25 hours to get the sails) however, we figured out some bugs and where I will need help when our crew goes home. I did get to jump in the sail bag a couple of times to walk along the boom to unhook items or later on to help flake the main. That was fun! There are so many working sheets and halyards (sheets are control lines and halyards are hoisting lines) on board it is a bit daunting and will take a bit of getting used to. Our main sail is 1000 square feet (bigger than our first house of 988 square feet).

Posted by Sherrie's Cruising Blog at 12:16 PM No comments:

It has been an exciting few days here. We had our sails put back on along with new running rigging (lines and halyards). It was very educational to watch North Sails re-run the lines and halyards. We learned some tricks for when we will have to do it ourselves.


We had our new friends Lisa, Gary, Hannah & Quinn over for dinner. I was able to bake the meatballs in the oven. The kids were having a blast while waiting for dinner.

I went into the Eczane (local pharmacy) to see if they carried my allergy nasal spray. To my excitement it was available for 15 TL which is equal to $7.50 CAD without a prescription. In Canada this used to cost me $35.00 plus the pharmacy fee.


I was also sent up our 70' mast on a recon mission as other boats are having trouble hearing us when we transmit on our radio. I needed to take some pictures of how the antenna is mounted.


Shaun, Jordan and I walked into town to pick up the rest of our boat graphics to be put on safety equipment.

There is a local cat that lives near the washroom and he is soon lovey so the girls have named him Lovey. I would adopt him if I could.

We were walking by the boat yard and to our delight we found these Turkish tuna.

Posted by Sherrie's Cruising Blog at 1:17 AM No comments:

Wow! We have been living aboard for eight days now. Not too much to write about today but I wanted to share some pictures.

Our days consist of school, chores and daily living. Our chores do take a little planning as we have to walk 1 KM to the first bridge just before the entrance to town. Taking our laundry in is quite a site as it looks like we are moving out. We use a roller bag or two depending on the amount of laundry needing to be cleaned.

We finally got our boat graphics put on the port and starboard hulls. It looks AWESOME!

Here is Jordan practicing her selfies.
We were invited to a birthday dinner for one of the cruisers. Below is a picture of my new friend Colin. He is a super fellow.
Jordan has perfected her selfies.

We are docked on pontoon A which is on the protected side where the cruise ships and ferries dock. Here is one of our neighbours.

The girls have snack time everyday. Of course there are always shenanigans.

Jordan and I were walking over to the park for a recess break when we came along the pirate ship Barbosa.


This is our recess at the park.

Earlier in the day we headed over to the soccer pitch for PE. It was locked but the fellow offered us basketballs to play with in the gym. I haven't had that much fun in years. I had forgotten how much fun basketball can be.

After our full day of PE, school, recess at the park and all the walking Jordan crashed outside on the seat. She had adorned it with pillows to lie on and a throw pillow for her head.

Posted by Sherrie's Cruising Blog at 11:32 PM No comments:

We made it to Marmaris on April 10 and are now officially living on our floating home. Pics to follow.
I have met a new friend Connie (who lives aboard a boat named Noah) who explained to us to take our time unpacking and settling in. Do something everyday.

On the first afternoon/evening we arrived Shaun took Jordan over to pick up her new scooter.
This saves our shoulders and allows Jordan to boot around. The following day April 11 we headed to 9:30/10:00 AM coffee to meet some of the other cruisers. Lovely group of people.

When our feet are the only way to travel and everything is 1 KM plus away we have to really think about what needs to be picked up every time we leave the boat. In our travels we were able to buy Paige some rollerblades. She was on those things most of the day. So much so she ended up with a blister..... LOL It is a pleasure to watch.

On April 12 Paige finally met Quinn who is an 11 year old cruising kid who also LOVES minecraft. Unfortunately, Marmaris had another power outage so instead of the electronic version the kids folded minecraft paper and then spent hours playing with the lego that was brought.

Today April 13 was the first day of homeschooling. 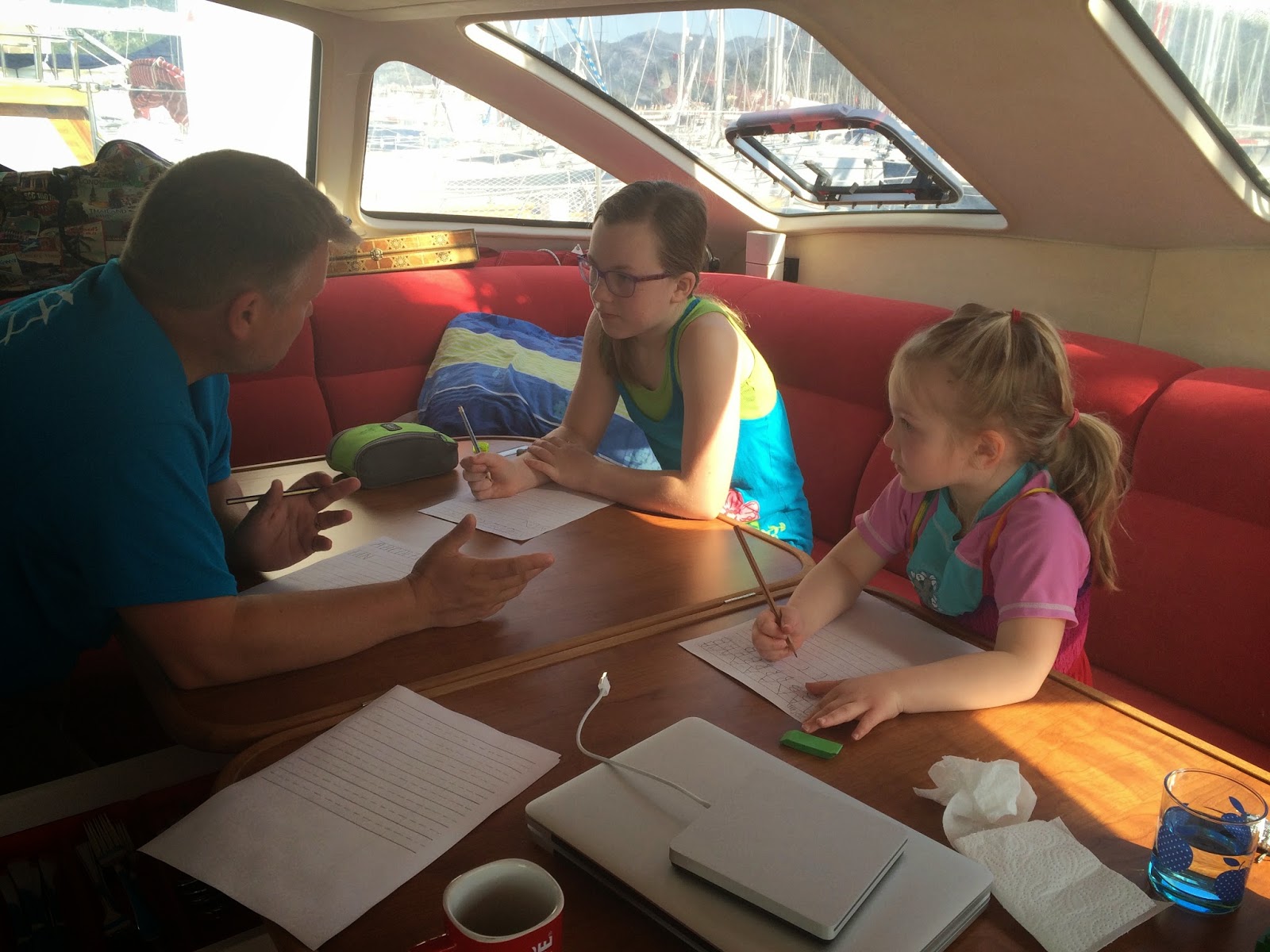 After the 9:00 AM Marmaris cruisers radio net we began. The radio net lets all the cruisers know the weather, upcoming events, taxi shares needed etc. As Shaun was explaining the gothic style printing that he wanted the girls to practice Jordan's hand shot up. Shaun gave her a chance to speak and this is what she said "I would like to make a comment about your teaching, if you have something that you would like to say you need to put your hand up". The way she nonchalantly expressed herself was so great. Uncle Ron was laughing so hard he had to leave the boat. I love the fact she speaks her mind.

For recess we walked into town to pick up new school supplies for the girls and let them play at the park for a bit. We counted a bunch more cats along the way. I think the Marmaris cat count is up to 80 or something. The crazy thing is the girls both act like they haven't seen a cat EVERY time they see a new cat. It is quite funny actually.

We came back to the boat to make lunch. The girls did their math work while it was being prepared. After lunch was their quiet time. Let me rephrase that..... Paige's quiet time. Jordan was all over the place. We organized a few more items and by this time we were ready to head back into town to pick up our dinner and to have a chai tea.

Dinner done and this is how Paige relaxes.

Posted by Sherrie's Cruising Blog at 10:29 AM 2 comments: