A turkish family opens their home to us

As we were walking through the Saturday market on Halloween we had stopped at one of the stalls when we heard a commotion at the back and noticed a girl that was wearing rollerblades and had slipped off the chair. Of course we had our posse of marina dogs with us and the girl was interested in the dogs. As we made our way through the market the girl and her friends would pop up to cautiously approach the dogs.

As we were sitting and having our Saturday gözoleme, a lovely turkish crepe (https://en.wikipedia.org/wiki/Gözleme) the girl and her friend approached us and the dogs. Paige offered up some of her dog food to the girls and as they were feeding them the girls father walked past and we ended up speaking with him. It turns out that he and his wife sell clothing at the market. In our conversation we mentioned it would be fun for the girls to get together to play. He said that he and his family had time on Sunday. He introduced himself as Ibrahim and his daughter as Zeynep. In our short conversation we found out that he can speak a little french as well as english.

The next day as we were sitting at the porthole chatting we happened to see Ibrahim, his wife and his daughter walking by the marina. We invited them in and we went for tea. As we were sitting, Jordan and Zeynep went rollerblading. Ibrahim introduced his wife as Nevrye. As we were chatting Ibrahim mentioned that his wife was making a special soup the next day and they wanted to invite us over to their home for this meal.

We felt honoured to be invited and jumped at the opportunity. Ibrahim offered to pick us up at noon and then bring us back after the visit. He warned us that we would have to ride up front because the back of his vehicle was full of clothing that they sell at the markets.

We woke up Monday morning with nervous anticipation. As noon approached we made ourselves presentable. Ibrahim arrived promptly at noon. Shaun had Jordan on his lap and I had Paige on my lap. We ignored all health and safety measures and headed out on our adventure for the day. We drove to the outskirts of Finike and arrived at their apartment. It was located in a very quiet neighbourhood. We noticed many children and a distinct lack of traffic noise. There is central courtyard where the kids all play. Zeynep was waiting excitedly for us to arrive. In fact there was another girl (Hyett) from Paige's volleyball team that lives in the same apartment building.

The interior was very bright and airy, painted similarly to our old homes interior of cloud white on the ceiling and beige walls. As we chatted the girls started to play. We moved out onto the deck and Nevrye served us the special sweet soup. It tasted like a rice pudding and was unlike any soup I have ever tasted. It had peanuts, walnuts, bulgar, grapes, nectarine, currents, and chickpeas. It was such a lovely combination. We also had çay. After we were served some lovely desserts from our favourite local shop NUR. Soon after Nevrye's mom who lives across the courtyard arrived. We thought that this was the entire meal but Nevrye and her mom disappeared into the kitchen to make gözoleme. Shaun and I had already had 2 large bowls of soup and some desserts. The gözoleme was also very delicious.

We felt bad but had to cut the get together short as we had to get back to the marina for a meeting of the cruisers. We had already been with them for 4.5 hours, I truly believe that we would have been invited to stay with them until late into the evening had we not had other commitments.

Below is a picture of our new friends who treated us like family. 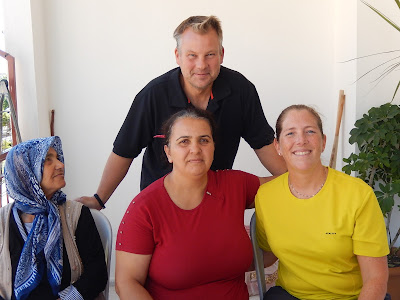