We arrived into the Tobago Cays to stay for 3 nights after a short sail from Bequia (9 miles our shortest yet).

The water was stunning and to top it off our good friends on s/v Maple and s/v Auriga were there. We also saw two turtles as we were anchoring.

Maple cruised by in their dinghy to let us know they were heading towards Jamesby Island. We dropped our dinghy and headed over. The small beach was breathtaking, with white sand and a palm tree. Paige even got to try out her hand at cracking a coconut with a rock. She learned how to do this on Youtube. All of the kids played on the beach and in the water.

Later on in the evening everyone came over to our boat for beverages. It gave the kids more time to play and the adults time to catch up even more. The following day Maple and Auriga were departing.

We decided to stay one extra night at anchor near Petit Rameau as we wanted to dinghy over to Baradal island where the turtle reserve is located. It was very windy making it tricky to beach the dingy and when we tried to snorkel the turbulent water made for poor visibility. We hung out on the beach while the girls played with conch shells. We ended up chatting with a German flagged vessel, s/v Jade IV. The father and 4 adult children were sailing toward Grenada to celebrate his 70th birthday. Lovely family (whom we later ran into on Mayreau and again in Martinique). We didn't see any turtles in the reserve. Oh well, maybe next time.

For our last evening at anchor we moved to the other side of Petit Rameau. On this side of the island they offer beach BBQ's. The meal choices are lobster or chicken with rice and veggies. Our friends really enjoyed it. We decided to skip it as it was out of our budget. Perhaps on the way back down south.

There was also a cruise ship anchored off which shuttled people to the beach for the day. Their boat was able to beach and allow the people to disembark.

We left the Tobago Cays and sailed the 25 miles to Mayreau. We skipped Salt Whistle Bay as it was very crowded. We settled ourselves down the coast into Saline Bay, where we stayed for 5 days. There is not much in the way of provisions here but the beach is beautiful and the snorkelling is superb.

We also met s/v Resolute (Katerina and Dennis). Dennis explained that when we were in Tenerife, Jordan went trick or treating to their boat. Since then we have seen their vessel in several of the places we have visited. It was finally nice to meet them both. We clicked right away. Over beverages at our boat we mentioned that Dennis' Hideaway (http://www.dennis-hideaway.com) had a great atmosphere and that it would be great to meet there. The following evening, we did just that.

It started with us four and then Dennis popped in. He noticed the atmosphere was a good one with laughter, music and camaraderie so he bought us a round and served up some conch fritters. Later in the evening our new German friends stopped in. Conversation was flowing along with yet another round from Dennis. Shaun and I felt a little guilty as the girls hadn't had dinner yet so we said our farewells and teetered back to the boat. I was sad to leave because ambience was so pleasant.

By the time we got to the boat, I was feeling no pain. Paige was happy to report that they had both eaten and were just fine.

We hung out a couple of more days before making our beat up wind back to Bequia, St. Lucia and finally Martinique to await our Canadian friends whom arrive March 16.

We arrived into Bequia after a short sail from St. Vincent (9 miles in 17 knot winds). While we were in St. Vincent Paige and her friend Felix collected some new "pets" for our boat. Four geckos, two who remained with us. Paige named them "Chomps & Skipper".

As we were rounding the point into Admiralty Bay we noticed a dinghy heading our way jumping in the waves. It turned out to be the famous photographer Kenmore Henville of Bequai Photo Action (http://www.bequiaphotoaction.com). He snapped numerous photos of Element and her crew under sail and delivered a USB key and a print all professionally packaged for us to preview the following morning. Here is a link to the photos he took: http://www.bequiaphotoaction.com/season16_17/february2017/element_170219/

His prices are outrageous but his photos are amazing. We chose to buy the print but nothing more due to our budget constraints. He keeps the photos forever on his site so, if we choose to order them later they will be available.

As we entered the bay we noticed our friends Maple were anchored in Lower Bay so we decided to drop anchor right behind them. We got ourselves lined up and as I was about to deploy the anchor it decided to stop working. In fact there were sparks and a very unhappy noise. We were forced to head back into Admiralty Bay and hooked up to a mooring buoy for the night. Shaun pulled the thing apart and found the problem, a sheared pin between the motor and the drive shaft. Thankfully he was able to replace it with a stainless steal screw in the same diameter and length. A perfect fit. During this time we were surprised by a visit by our friends from Maple. We hadn't seen them since September in Palma de Mallorca. It was such a pleasure to see them, catch up and to have the kids play. Jordan and Iris had a hard time saying farewell at the end of the visit. We always tell the girls that it isn't goodbye, it's see you next time.

The following morning we had to make a trip to the local hospital clinic as Jordan had been sick since we came back from Canada. It turned out that she had bronchitis and an ear infection. We waited approximately an hour but were then seen by the doctor. I had asked at the front desk what the charge was and was told that there wasn't one. I was however shocked when the doctor asked for a donation........ I made my donation to the doctor and to the hospital chalking it up to an interesting experience. All of the medications for children with the exception for the antihistamine (which the hospital didn't carry) were free at.

After the doctors visit we stopped in at Doris's to pick up some provisions. Bring your wallet as it is extremely expensive for groceries. She has a good selection but pricey, pricey, pricey. We then quickly stopped to grab some fruit and veg at the market near the dinghy dock on the way back to the boat. The selection is really good.

We have been shocked at the prices of provisions in the Caribbean. Expect to pay 2 to 3 times more for groceries, and the selection is not great. We know now that St. Lucia and Martinique are two of the best islands to stock up before heading south.

We ran into our friends from s/v Auriga (Helmut, Antje and Felix) and agreed to meet them the following morning to see the Old Hegg Turtle Sanctuary (http://turtles.bequia.net). We also mentioned to them that Dive Bequia (http://www.divebequia.com) offers a free beginners scuba class for free, every Tuesday at 1:30 PM. It just happened to be a Tuesday and Paige and I were already signed up so, Antje and Felix joined us. The only item needed was the small booklet to read through.

We met Antje and Felix at Dive Bequia, took our short multiple choice test and signed our lives away. Kathy was our dive instructor. She brought us out into the sea water and explained all of the gear and taught us the basics, how to clear a regulator with breath and with the regulator purge function. Kathy also taught us how to grab the regulator if it is lost and how to clear a mask if water has leaked in. Once we were all clear on the basics we knelt underwater and watched her complete each task followed by each of us performing the same. We then took a short swim underwater to get a taste for scuba diving. Once we completed this portion we were qualified to do our first open water dive. Paige and I are officially hooked.

The following morning we met the crew of s/v Auriga and grabbed a taxi (Nugget Taxi Service) to the turtle sanctuary. We read in our Doyle guide that we could walk there but are extremely happy to have used the taxi service as it was a LONG way. We arrived at 9:30 AM and unfortunately the founder Orton King was not there. If you do go and would like the tour with Orton , he usually arrives at 10:30 ish. We were however greeted by a staff member who allowed us in to take a look at the current resident Hawksbill turtles.

There were several pools with different aged turtles. There was one baby, several 5 year olds, a 16 year old, a 19 year old and a 28 year old. I discovered the 16 year old loved its shell to be rubbed. As soon as I started rubbing it got super excited, it was the coolest experience.

Upon leaving, Jordan asked if she could get a t-shirt. We said no but the fellow gave her one anyway. It was such a nice gesture that we donated some money. 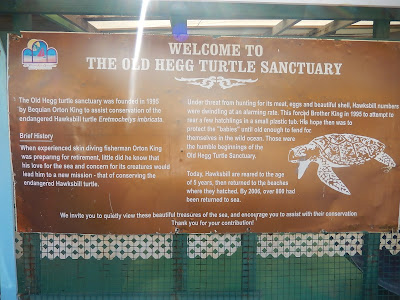 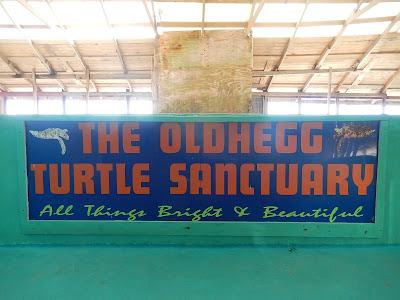 We met up with the crew of Auriga for drinks at Jacks later that evening. Felix and the girls took a walk to the caves and then played at the beach before we headed back to the boat.

We were planning on leaving Wednesday to head to the Tobago Cays but chose instead to visit with our friends Nadia and Manuel of s/v Manado who happened to drop anchor right beside us. While we were visiting they pulled out their drone and took some awesome footage of Element and Manado anchored in Princess Margaret Bay.

While in Bequia we also were able to get together with another kid boat s/v Elojoha who have 3 children. Paige had her first paid babysitting gig on their boat. This allowed Ana and Emanuel to have an adult evening, the first in six months. The six adults headed over to Jack's for some beverages. The following day Elojoha and Manado headed out. It was a great visit.

Bequia has been one of my favourite islands to visit so far. They are equipped with laundry services, water, diesel and lobster (15 EC per pound = $7.50 CAD per pound) all delivered to your boat. The fruit and veggie stands have a good selection and there are some provisions available in the shops. Knights Trading is the cheapest by far bur Doris' has the best selection of meat. Princess Margaret Bay is close to Jack's and a wonderful beach. I look forward to returning soon.