We left Nisyros and headed towards Kalimnos in front of some bad weather. We arrived inside the breakwater and attempted our first ever med mooring. Med mooring is when the boat reverses in while dropping the anchor off the bow. It only took two attempts. Yaresh the dock master asked for our transit log and payment. The moorage here is 7.63 euro per night plus water and electricity…… Ron hugged him after hearing the cost. In comparison to Bodrum, Turkey of 220 euro per night plus water and electricity. I have heard that many of the Greek harbours are free to moor.

Thinking that we were all tied safely, we headed into town to check the place out. Overhead the bad weather was coming in quickly. We got back to the boat and got the girls to bed. The thunder and lightening started first, followed by extremely high winds from the south. It was 11:00 PM when Shaun was in the shower and heard/felt a bang. It turns out our windlass chain gypsee (the part that pays out and brings in the chain of the anchor) was loose and paying out chain. This on top of the wind off our bow allowed the boat to be pushed into the cement wall. There we were in pelting mud rain attaching more lines, tightening the chain gypsee and getting soaked. The lightening was amazing to watch. I was so tired from the previous nights lack of sleep that I wanted to go home. The feeling passed as I talked myself through the stress.

This is a different island than the others that we have been on. More working class people. Less touristy, more garbage. More traffic, next to no side walks. Excellent shopping. The streets wind back off the main strip. There are tons of toy stores. Pretty much every second or third store is a toy store.

Thursday came around and as the day progressed the harbour waterfront where we are anchored became extremely packed. I mean sardines, we were packed in there…… I have never seen so many boats packed in along the wall. It was a Greek long weekend.

Jordan and Paige met a boy names Kai from England. They played well together. Fishing and using their nets. There was a particular crab that was eluding Paige even though she had some peanut butter out. It outwitted her. All was good until Jordan fell on the rocks. She was lucky and only came away with a scrape on her nose.

We rented a car today to explore the island. As we headed across the island we saw the surroundings start to change. Kalimnos is a destination for divers and rock climbers. The high mountain walls with their caves are amazing. We were able to stop on the side of the road and see some climbers in action. The roadside flowers and hillside bee boxes are also a great site to see. We visited Emporio. We had crépes at a beachside taverna. The girls played on the rock beach. We had seen a sign for “The Early Christian Bath” so we followed our noses to a very disappointing overgrown grass strewn rocks. Off we went to Vathi an incredible fjord of beautiful water and cliffs. The drive throughout the island spanned from desert to valley greenery. Stunning. There are a ton of goats as well roaming free. We stopped at our first automated cash gas station. There is an ATM like machine that you enter your details and cash into and then pump your gas. No attendant needed. We also passed 30-35 fish farm pens along the coast and then drove through a very industrial and empty part of the island. It felt very different. It also is Saturday today.

Posted by Sherrie's Cruising Blog at 9:39 AM No comments:

We left the grips of Kos marina heading towards Kefalos Bay on the other side of the island.

We left at 11:00 AM and arrived in the bay 3:45 PM. We had an awesome sail around the point. We averaged 8 knots of boat speed in 17 to 23 knots of wind. (averaged about 8.5 knots). This is the fastest and most consistent sailing we have encountered.

We anchored in 20 feet of water, dropped the dinghy and headed to the beach/bar in search of internet and a strongbow on tap. Paige got to test out her metal detector that we brought all the way over (it was packed in the snowboard bag). We went into the Super Market and were pleasantly surprised at the selection. We picked up a bottle of Ouzo that the Greeks drink.

Later on in the evening we barbecued chicken, cooked up some rice and veggies and had a feast. After the kids went to bed we played an animated game of Settlers of Catan (including Ouzo). Tons of laughs. I got my ab work out in. I managed to kick butt.

We decided to pull the anchor up and head 2 nautical miles over (the next bay) to have our lunch (BBQ hamburgers) and play at the beach. We anchored in 8.5 feet of water in crystal clear water. Grabbed the dinghy and headed to the beach. The water is amazing and refreshing. The girls built their pre-planned sand castle and swam, snorkelled and played. The adults went for a beer and then around 3:30 PM headed back to the boat. I swam back while the others brought the dinghy. It was a slice of heaven.

We left Kos and motored over to Nisyros. We did’t raise the main sail as the wind was very close to our bow. The winds were gusting up to 15-20 knots and the swell was 3-5 meters. We did however see a sun fish near the surface as we passed by.

We made our turn after passing the dangerous rock awash, unfurled our jib and cut the motors. Just then Shaun spotted some dolphins. There were three. One stayed with us and played off the bow. Incredible! This was one of the items on my list to see in the world.

We arrived into the harbour of Pali and dropped our anchor in 9 feet of water. We did our 1 hour of anchor watch to make sure we weren’t dragging and then took off on our explorations of Nisyros.

While the boys negotiated a van rental, the girls and I played at the park. This park is 15-20 meters away from the water. A lot of it is rusted (which lead me to explain why metal, salt water and wind don’t mix). Jordan finally made it across the money bars unassisted. A huge accomplishment! Paige sat reading her book in the alcove of the slide.

Once the van deal was complete (45 euros) for a 8 person diesel we headed off in search of the castle and the other town of Madrakes. The winding road and views are stunning. We followed the signs and arrived at the castle. The walls of the castle are made of blackish grey bricks and are super thick. The only surviving doorway is approximately 9 feet thick. As we entered inside we noticed a sentry who was a little skittish. It could be due to the fact he was a lizard. While looking around and listening to the sounds of the crickets, goats and sheep, it was easy to imagine people living inside the walls to keep safe from the Turks or other marauders. Situated on top of the hill the 180 degree views took your breath away.

We hopped back in the van and headed to the town of Mandrakas. While driving we saw a family of partridges crossing the road. After a wrong turn down a pedestrian street we managed to park the van and start our exploration on foot. Walking down the narrow streets with the stone buildings on either side was surreal. I have only seen these types of villages on TV or read about them until today. After we stopped for a bite to eat along the waters edge we made our way back to the great little ice cream place we saw earlier. Ron tried the local Almond flavour and expressed that it was the best he had eaten. The girls both had the watermelon/cherry flavour, very good indeed. 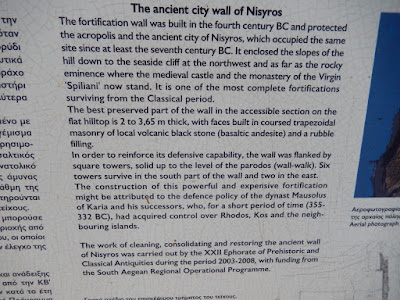 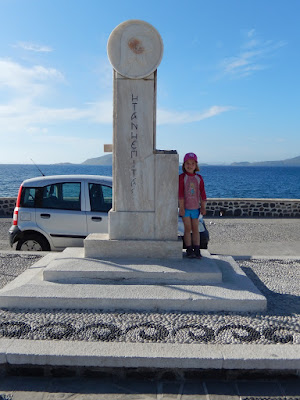 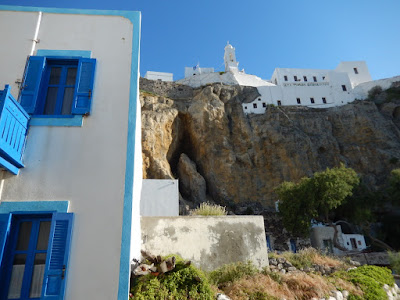 This morning we got up at 7:00 AM so that we could beat the tour buses that arrive at the volcano promptly at 11:00 AM.

The road is windy and very scenic. The terracing that has been done in years past is evident on all of the hillsides. There are many rock walls, beehives, even a turkey and goats as well. We stopped at the top of the volcano rim to take in the enormity of it all and then proceeded down into the crater. There is a herd of cows that live here as well. The adults paid 3 euros and the children are free. We paid our fee and started the decent into the caldera enjoying the soft limestone and marble trail. Wafts of sulphur were hitting our noses. As soon as we reached the bottom the smell was really strong. Looking across to the other side we could see the gases rich in H2O, H2S, CO2, H2 and CH4 rising from the fumes cracks. We happened upon a boiling puddle of 100 degree mud with a pH between 1.5 and 3.0. The last tie the volcano erupted was 20,000 - 25,000 years ago. Ron and I took an extra 20 minutes and walked up and back to see the 2 farther craters. Pretty amazing stuff. Best PE log entry thus far for school. 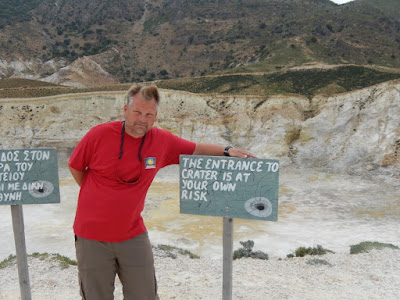 While we were at the crater we looked up to see the town of Nikia precariously perched atop the rim of the volcano. We headed up there to see a lovely Greek town with narrow pedestrian streets meandering through homes and shops. Each walkway ends with a view that is stunning with blue, blue water and sailboats cruising. There are date trees growing wild. The buildings are multi coloured with white being the predominate colour. It contrasts beautifully with the blue sky and sea.

We found our way to a small restaurant at the beginning of the town called “Andriots” with exceptional views and exquisite food. This has been my best meal so far on my entire trip. I had a “Summer Salad” and a “Carbonara Pasta”. The salad had orange, avocado, dates, walnuts and fresh feta cheese. The pasta was amazing as well with mushrooms, bacon, cream and garlic. I could have stayed there overlooking the Aegean sea forever. 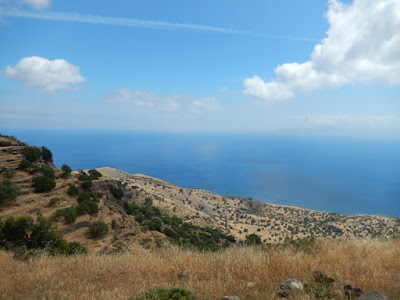 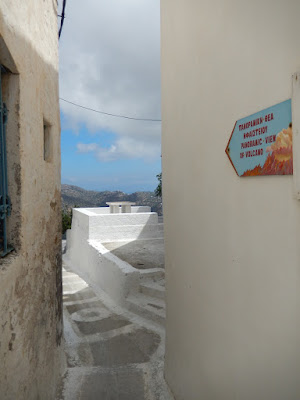 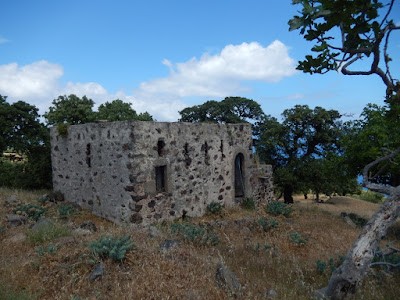 We went back to Mandrakes to have dessert and sit at a beachside restaurant with wifi to enjoy the rest of the afternoon before returning the van in Pali. We head to Kalimnos in the morning as there is a wind storm coming in on Wednesday (Force 8 with winds of 33-40 knots of wind which translates to 62-75 KM/hour).


Posted by Sherrie's Cruising Blog at 10:11 AM No comments: