So sorry for my delay in posting. I have been too calm when it comes to my blogging.

We arrived into Tenerife for our much anticipated Atlantic crossing and to meet the other cruising families that would be crossing with us. At this point there were only a few boats at the dock, much to our kids disappointment.

Puerto de Tenerife is located near a lovely fountain amongst picturesque buildings. The town is pretty and many of the shops needed are within walking distance.

Our first order of business was to figure out what the heck we were going to do for Halloween this year. The previous year was a huge hit in Finike as there were many live-a-boards that we organised for trick or treating.

Jordan wanted to be a witch and Paige made her own costume, a bat. Shaun had met a family that had received candies from several of the boats, so off we went along the docks. I was not thrilled about it but Jordan went boat to boat trick or treating. Many of the boats were not prepared but played along. I overheard one such boat speaking french to one another..... here is how the conversation went as they were down below (translated into english) "what can we give her? We have cookies, cakes, ham". It was priceless. Jordan came away with a great haul. Paige was too embarrassed to participate. I don't blame her. After the boat trick or treating we took them for wifi.

While we were in Tenerife, Paige celebrated her 13th birthday. In the days before her birthday we had rented a car as we needed to visit the Volvo Penta store for engine parts. During our drive throughout the day we came across a Toys R Us and Paige found a Lego set that she was interested in. We purchased it but she was not to open the box until her birthday.

As the days flew by we finally started to meet  families that were making the crossing. It was nice to feel human about the amount of stress everyone was feeling. There was so much to do to prep the boat.  Most people I met were first time crossers (if that is a word) and were feeling as chaotic as I was feeling. We had safety gear to install, prep for crew and make sure we had a list of provisions to buy, etc.....

Throughout the chaos the rally offered up workshops where Jimmy Cornell, his daughter and many of his staff whom have loads of experience spoke. Shaun attended Atlantic ocean crossing tactics and one on weather. I was fortunate enough to attend the families that cruise and the one on provisioning. During one of my workshops the staff were trying to explain the difference they have seen with the cruisers before the crossing and after the crossing. They said the departing cruisers are stressed and worried (absolutely) and after everyone is relaxed. Of course us first timers were thinking, no way. But after completing the crossing I can attest to it.

We were fortunate to have a few cruisers that offered up their time for some kid friendly yoga and cartooning (Jim Toomey). The kids loved them both. The rally also had an arts and crafts day where the kids made pennant flags of their boats. They were later hung on the glass window at the office. Another evening there was a potluck dinner where we got to meet all of the participants, it was lovely. 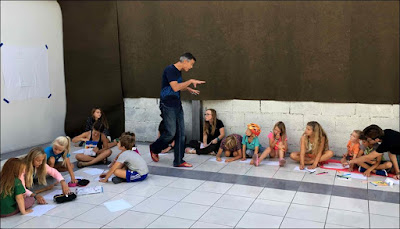 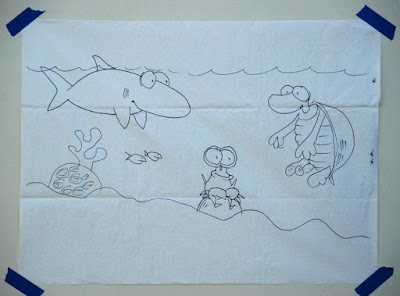 During all the craziness our crew arrived from Vancouver to help with our crossing.  They were put to work to help with the preparations and to enjoy the chaos. We enlisted Wayne to help us do our biggest provisioning shop to date and Marnie jumped right in to help with wiring fans, fixing ceiling panels and reapplying a hose to a through-hull. We were thankful for the help.

During our provisioning shop we realised it was taking a lot longer than we had anticipated and we were getting really hungry so, we inquired at the information desk in the store to see if we could leave our full carts and grab some lunch. No problem whatsoever, so off we went to grab sustenance for the balance of the shopping trip. Upon our return we grabbed three more carts and finished up. By the time we got back up to the register they had already processed and bagged the previous load and all we had to do was ring through the balance and pay. Of course there was a hitch..... our credit card wouldn't allow the full payment and I hadn't brought my second card. Off Shaun went with the crew back to pick up the card. After several more attempts we realised that we had to break up the total into three different transactions. Once completed were were able to scheduled the delivery for the next day between 9 and noon. They arrived promptly at 9 the following morning.

On the same day the groceries were delivered Wayne and the girls went to see the highest point in Tenerife, Mount Teide (https://en.wikipedia.org/wiki/Teide) on a trip that was organised by the rally. Jordan hung out with the crew of s/v Bonaire as they have two boys Jordan's age and Paige hung out with the kids from Sacre Blue. It was a blessing that the boat had fewer people as Marnie and I tirelessly worked on receiving, repacked and finding homes for the 2000 euros worth of groceries that were delivered.  Marnie and I both were overwhelmed with the amount of stuff that needed to be packed away but as we went the task became manageable. 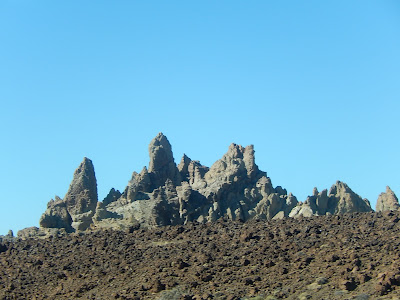 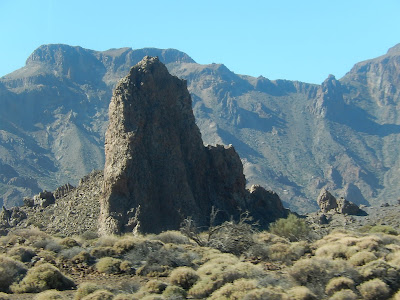 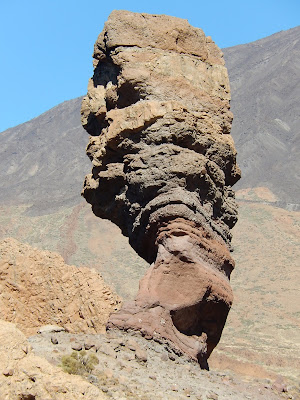 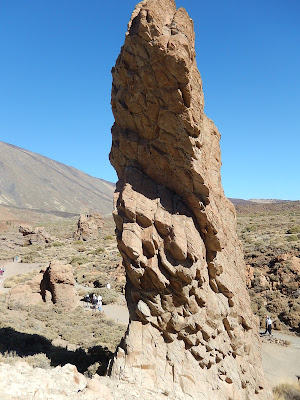 The following morning Marnie and I woke early to walk up to the local produce market to buy fresh eggs, fruits and veggies. We then stopped for a coffee and then grabbed a taxi back to the boat to start the washing and drying.

Here are some tips that we have learned about provisioning:

Have a detailed list (things get forgotten if they aren't written down). Buy lots of ziplock bags to repack goods. It blows me away how much space we saved when we repacked the goods into our own packages. Have several sharpie felts to label cans after the papers are removed. Wash all produce and dry it before storage to reduce the amount of rotting.

Throughout the craziness of our boat prep, we also had to visit a dentist to ensure our teeth were in tip top shape before crossing. They were not. In fact I am embarrassed to say that both kids had a lot of cavities. Part of the reason was the Turkish dentist missed seeing cavities and those that she fixed she fixed badly.

Our first appointment for the girls in Tenerife should have taken 2 hours but due to fear/freaking out, turned into 4 hours and I had to make another appointment. Here is a little back story...... I myself am allergic to all local aesthetics and have been told that this can be passed on through genetics. During this first appointment Jordan was freaking out and all of a sudden said to me "Mom, my hands don't work, I can't open them!" I was already on the verge of tears and lost it at this point and asked the dentist to call an ambulance as I was uncertain what was happening. I thought that she was having an allergic reaction to the freezing. The EMT's arrived and both the dentist and the EMT's explained that she was having a panic attack.

As you can imagine, I was "thrilled" to have to return with both girls to go through this again a week later. Thankfully, it went a little better (no ambulance and less crying). I arrived back to the dock and headed straight over to the pre-planned ladies night on Sacre Blue (a welcome diversion) for a much needed glass of wine! 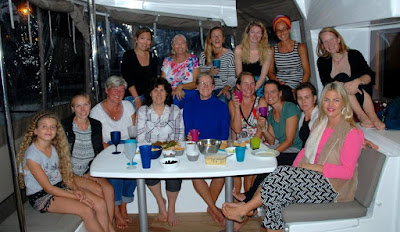 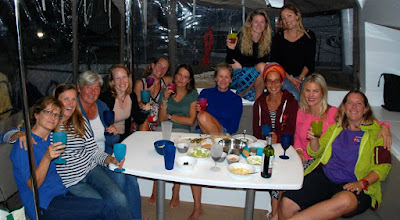 During our stay we had noticed a boy around Paige's age who was next door. It turned out that they were crossing the Atlantic with our rally. Felix and Paige became fast friends with similar interests.

During another evening we were able to see the super moon.


While we were at the market I purchased a ceramic pot for the celery plant I was growing. On this same day we enlisted Paige to paint our logo on the concrete wall to add to the plethora of past boat logos. It turned out wonderfully. 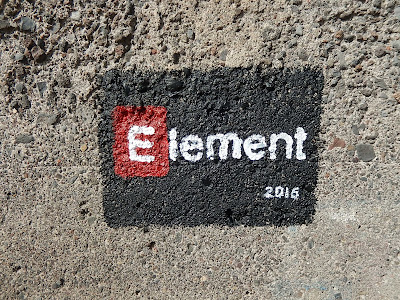 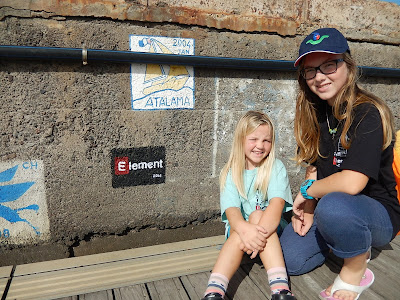 On the day before we all were set to depart we boarded a bus back over to the yacht club for an awards ceremony and beverage. 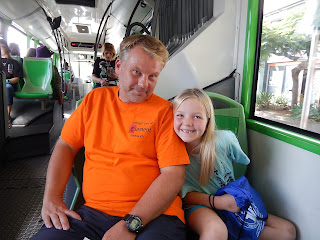