We sailed up the west side of the island heading for Rodney Bay. In the morning we had the wind behind us but, as the day wore on the wind slowly moved forward. By the afternoon we were beating into the wind with only our jib. The weather was deteriorating and we were thinking we would have to divert to Martinique. The waves were 8-9 feet and when we take over to head for Rodney Bay the swell was broad siding us. We turned on the motors and furled in the jib. We finally arrived into Rodney Bay and radioed the marina. We were directed into the lagoon and had to wait while the dock master (called a marinaro in the Med.) arrived to help us hook up to the mooring buoy as we only had our port rudder and steerage was difficult.


Once hooked up we dropped the dinghy and Shaun had to check in with customs and immigration while we waited. Upon his return we all headed into the marina for a drink. We ended up stopping at a bar where we ran into a boat that had been in Tenerife at the same time we were. It was nice to see them, they had left the day before us. After chatting with them for a bit we decided to take their advice and try "Ritual Sushi" for dinner. It was awesome and the portions were huge.


The following day we tidied up a little, sprayed the boat to try and kill the cockroaches that we have been dealing with and packed our bag for our much anticipated villa visit. My parents were gracious enough to book a villa “C’est La Vie”(http://villacestlavie.com) in St. Lucia. They also flew my brother and his wife out to spend Christmas with us. It was so lovely to see everyone.

We radioed the dock master and asked them to pick us up so that we could catch our 2:45 pm pre-arranged taxi to the villa. We waited near the taxi stand for 45 minutes for our ride before we arranged our own. Apparently, the taxi driver was there waiting for us in a different location. Oh well, all part of the adventure.

As we arrived at the villa we were greeted by my parents and the villa staff, Jeff & Leanne would arrive a bit later. We then received the grand tour. Astounding and luxurious are two words that come to mind when describing this place. The windows have shudders on them but can be opened to the elements. The property itself is huge with an abundance of local flora and fauna. The girls had their own room with twin beds with their own mosquito nets. A luxurious bathroom and a wonderful deck overlooking the private pool (waterfall included). My parents had the room across the hall from the girls and we had the room next to my parents. There was a sitting room upon entering and then through a door the lovely dining room and veranda overlooking the private pool that is surrounded by shrubs and palm trees. 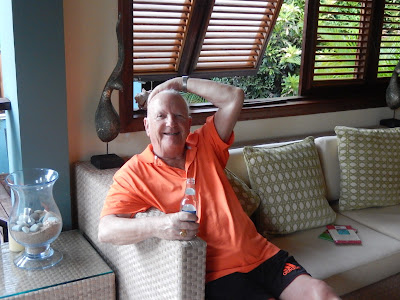 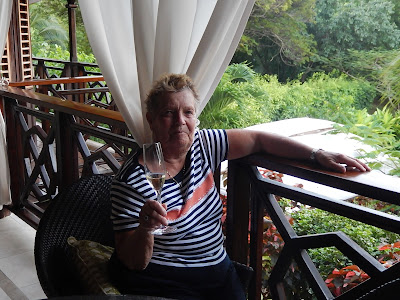 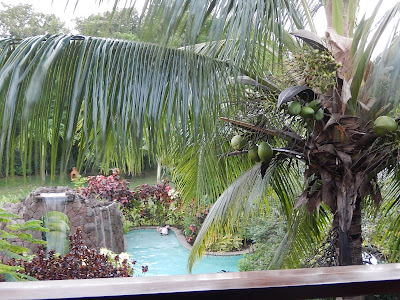 My brother and his wife were staying in “the cottage”. It is located to the right of the main house and really is as large as a house itself. Their accommodations were on the second floor and very comfortable. On the main floor was a sitting area and a kitchen for our personal use. Through a gate at the front of the property there was a path that lead down to the beach. 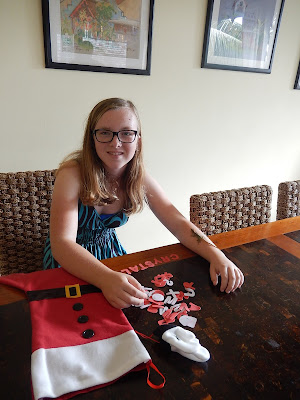 Throughout our stay we were spoiled rotten. We had 2 butlers serving us drinks and cleaning up after us. Each evening our beds were turned down and our rooms prepped for the evening (sprayed for mosquitos). Some evenings we had a mint and a card with a quote on it and others we would have flowers sprinkled on the bed. The girls were in heaven as they had great wifi and Netflix. They spent a lot of their time catching up on shows. 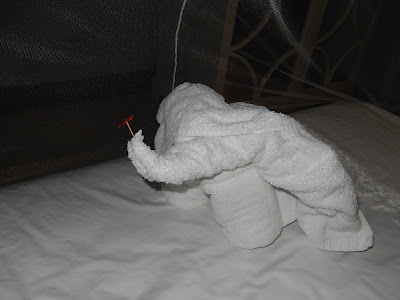 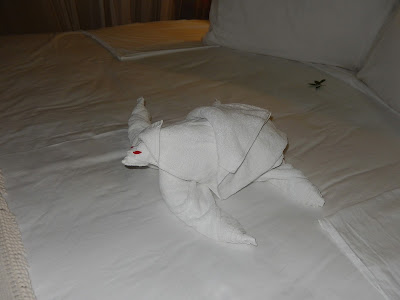 My mom and dad wanted us all to have an all inclusive break all together. They included our excursions, which happened to be deep sea fishing, zip lining, buggy tour and a rum tour. We were also treated to some wonderful meals that were prepared by the chef. Our first meal happened to be tuna, made from the 90 pound yellow fin that my dad, brother and sister inlay caught while fishing. They split the fish into thirds, one to the fisherman, one to us and the rest was given to locals in need. The sashimi was to die for and the blackened tuna steaks were mouth watering. On Christmas Eve we had a lobster dinner and on Christmas Day we were served a turkey, lamb with all the fixings.

We had a nine person van rented so we were able to get around on our own. Jeff & Shaun paid their 20 EC each and got their St. Lucia drivers licence. We headed into Rodney Bay to the local grocery store to pick up some groceries for ourselves.

A couple of days into our luxurious mini vacation we took my brother and his wife out to see the boat. We were moored in the lagoon but when we arrived our batteries were extremely low as we were still struggling with the solar panels. We made the decision to move her to the dock so that we could plug into power. Throughout our time at the villa Shaun decided to move our solar controller from the port engine up to our house bank to see if this fixed our energy problem. I am happy to report, IT DID!!!!!! We don’t have to pay for electricity anymore. what a relief. Now we just have to get our water maker functioning.

On December 20th, Shaun, Leanne, Jeff and I decided to go and see the new Star Wars, "Rogue One" movie. We thought it was going to be super busy so, Shaun headed into town to grab the tickets the day before. It turned out that we were wrong, there was only 10-12 people in the whole theatre. It felt like a private screening.

Shaun and I still needed to pick up some presents for the girls so we headed into Rodney Bay to see what we could find. While we were buying stocking stuffers in the grocery store we happened upon Santa's helper. I was able to have a photo taken.


It was such a nice visit with my family and the girls were spoiled rotten at Christmas. I cannot believe how many gifts everyone packed and brought over. We loved every minute of it. 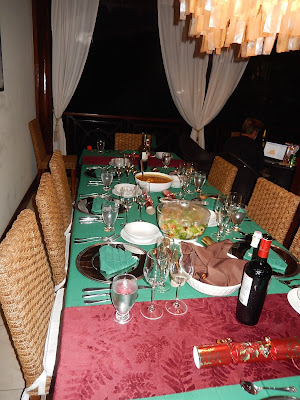 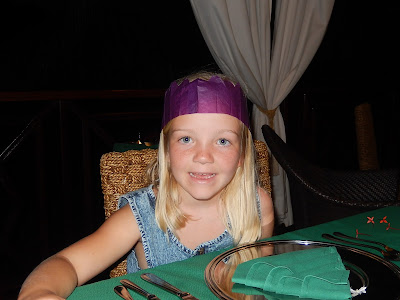 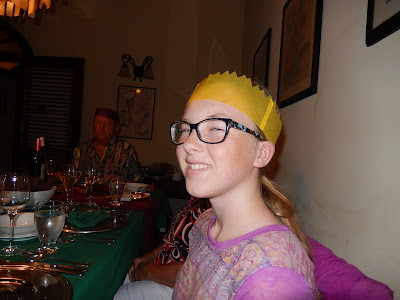 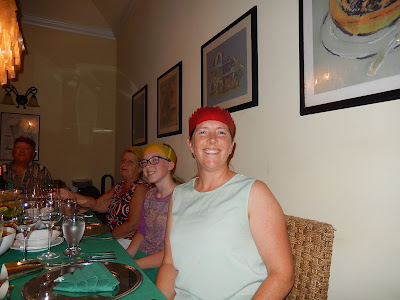 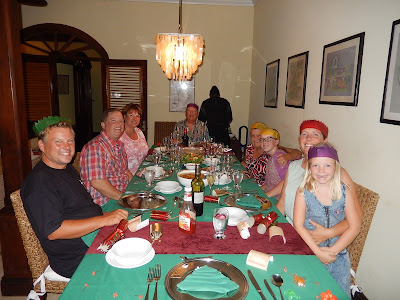 Paige especially loved the animals, specifically the lizards. Gavin, one of the butlers showed her how to catch them with a slip knot on a long piece of grass. She ended up catching a medium sized bright green one that she named “Hunter”. He loved hanging out on her arm and crawling in her hair. We were going to bring him back to the boat but were afraid that if he ran off into a bilge, he might die there.

On one evening we decided to go out for dinner. We ended up in Rodney Bay at a lovely Italian restaurant. The portions were huge and the staff were lovely. 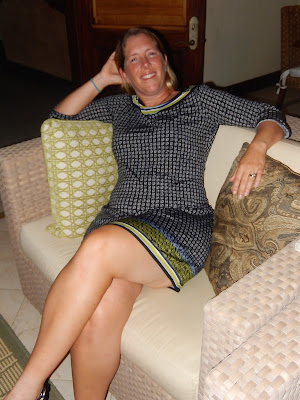 On the zip lining day my brother, Paige and I were the only ones that decided to go. We caught our ride and headed over. We arrived, checked in and were grouped with another 3 people. I think that they were from the States. We all were suited up and assigned our guides, two crazy guys that made the morning super fun. The lines were placed amongst a forest and we flew over a stream. There was a Tarzan jump thrown in there as well. This was the hardest one for me.

On our buggy tour we had rented two 4 seater buggies. They reminded me of the Flinstones cars. We arrived, filled out the waivers and had a quick intro into their working and then we were off driving around the island. Our first stop was the beach outside of Pigeon Island, we then headed up to a look out and finally some beach driving before heading back to our starting point. It was pricey but, a great way to see the island. 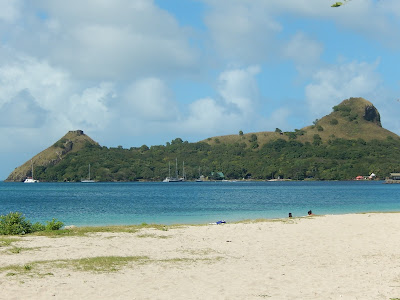 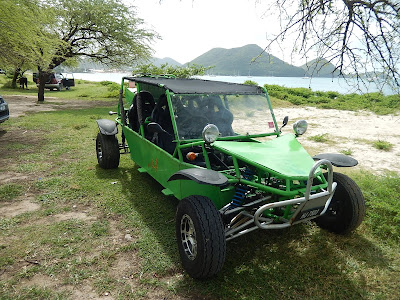 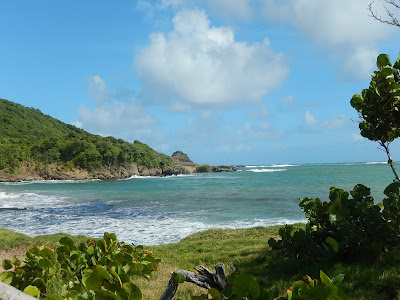 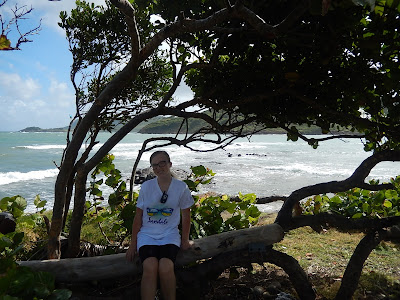 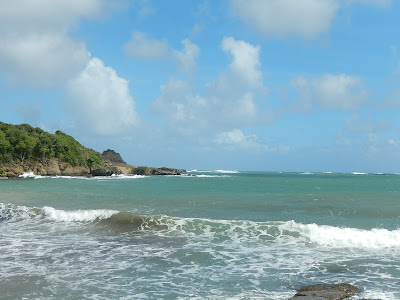 Jeff, Leanne, Shaun and I were the only ones that wanted to visit the rum distillery. We hopped into “Stormy Norms” taxi and we were whisked across the island. Stormy explained many interesting points about the island. St. Lucia used to grow sugar cane for the rum industry but later switched to growing bananas. The sugar cane is now imported from Guyana. The island has a population of approximately 180,000 people.


We arrived to the distillery and were taken on the brief tour. Once it was finished we were allowed to sample the 15 different rums available without supervision. 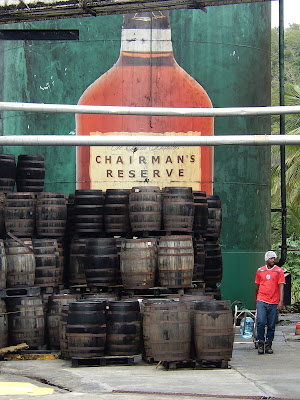 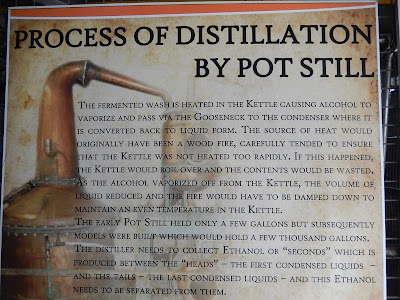 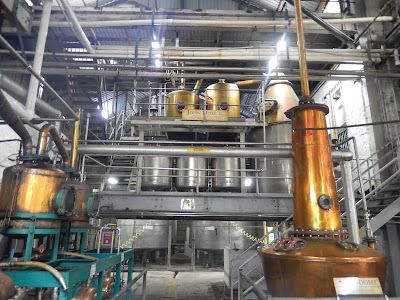 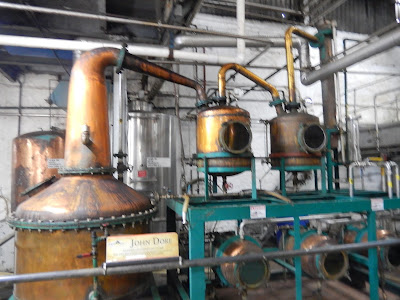 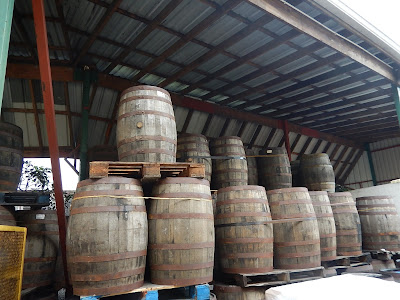 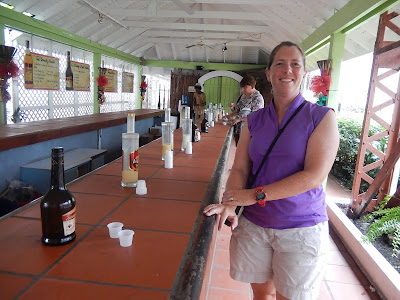 Stormy Norm then took us over to Marigot Bay. We got to take the local water taxi over to Doolittles and had their "rum punch". We are looking forward to grabbing a mooring ball here. When you do, all of the resorts amenities are available to be used. 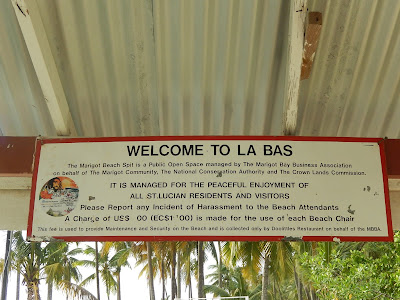 Our family reunion came to a close on December 27. Mom, Dad, Jeff and Leanne were scheduled to fly out that afternoon and we headed back to the boat. We said our emotional goodbyes and parted ways. The memories that we shared will be remembered forever.

Posted by Sherrie's Cruising Blog at 5:54 PM No comments: